Here’s the million dollar question: Where do we go from here?

We have no home, no plan, no direction, no ideas. We know we would like to avoid freezing our pipes and tanks, so that usually means something south. We know we need Internet access, even if through our Verizon account. We know we don’t want to go terribly far, we will spend a few weeks (without the bus) in Vermont in February.

Ideally, we would like to find someone who would allow us to park, work on our bus, plug in a cord, let us pay for our electricity, and let us be a blessing in friendship. A shed or barn with a place to keep our tools out of the weather would be almost to much to ask or imagine. We’re pretty simple people with very few needs. But, we need a place. A campground for “work camping” is a possibility (we are doing that now), but it might not be ideal to be with rows of campers when we are working on the bus. I think we prefer a back yard or driveway with friends, but we really don’t know what we want.

We’re looking for new friends, a place to park for the winter months, and hopefully get some work accomplished on the interior of the coach. We would appreciate and value your thoughts, opinions, and ideas for direction.

The progress of our bus build and is listed here along with a few photos of our early travel.  I strongly suggest, if you plan to build a bus, be sure to take it out for a ride as often as possible.  You’ll loose heart if you never drive it.

We have finished a winter of working on the bus and everything we set out to do is completed.  There is always room for improvement and projects, but the living area is comfortable and complete.

Two videos below.  The first is a tour by Amy of the interior and the second is some technical details from Dave. 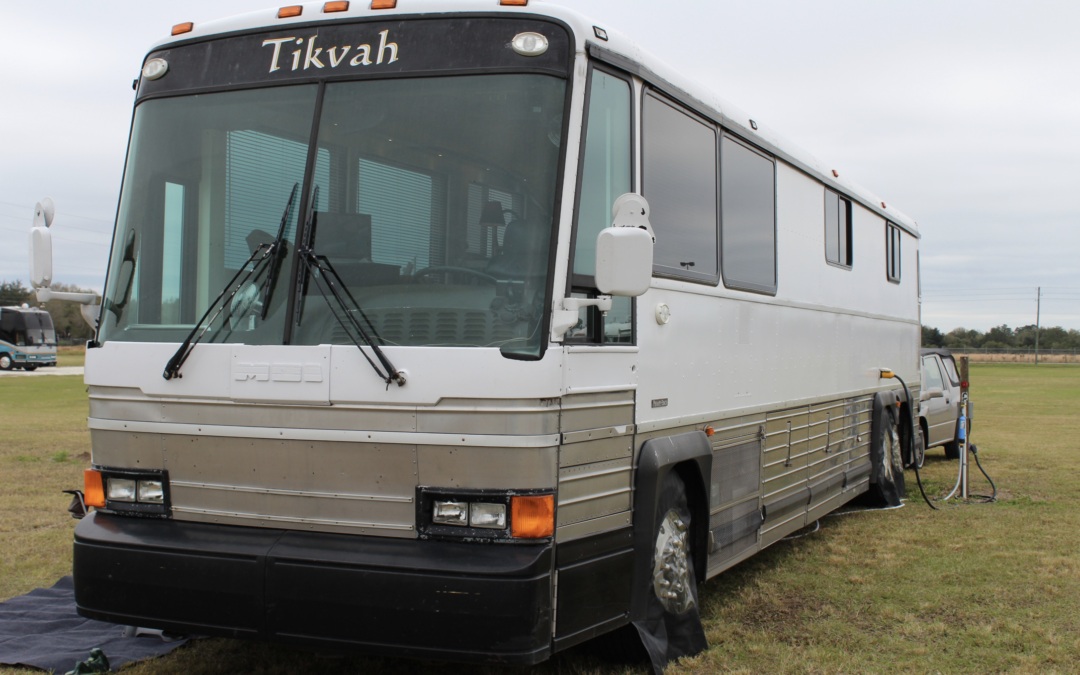 To go or not to go? – that was the question.
We were working for amazon.com in Kansas until the 20th of December. The rally starts just after Christmas and it’s about four to six days drive with a bus. In addition to the miles, the fuel isn’t cheap. Besides, what’s in Florida for us?
We went to the Arcadia bus rally last year, while we were still building our bus. The Tikvah bus had plywood walls, a skeleton frame kitchen, and a couch made out of milk crates covered with blankets. We hung a window air conditioner out, and had extension cords running everywhere. Despite our unfinished condition, we learned so much at the rally. We looked at every coach we could; we saw things we liked, and things we didn’t like. People who have built their own conversion, or even two or three, spent time with us and explained how they did their conversions. The information was priceless!
But why go this year – then again, why not?
We met some great folks last year, we built some lasting friendships, and learned at lot. In addition we managed to make some connections for our summer work project.
This year? Who knows. We might meet some more new friends. We will certainly get to spend time with the friends we met last year – It will be like a family reunion. I’m sure we will learn a few more things about the little projects that still need to be completed. And, we might even be able to pass along our experiences with somebody else that’s just starting their bus conversion.
So, off to Arcadia we went. Our plan? To drive to Pensacola, Florida, spend a few days on the Golf beach, and get some much needed rest, then finish the drive to Arcadia. As we got closer to the Golf it became obvious that a vicious storm would be our companion during the intended few days of rest; that just didn’t seem right. My wife suggested, that if we drove through the night and pushed hard for another day, we could arrive in Tampa before our daughter, her husband, and our grandson flew back north. We never dreamed we could make it there on time, but drive we did! We made it! Spent some wonderful hours playing with our grandson, and getting lots of hugs and kisses.
After a couple days of rest at a local RV park, we headed to Arcadia. We pulled our rig in the day after Christmas and a dozen or so converted coaches were already parked.
Our time at the Arcadia Rally was priceless! By the time the rally got started we were surrounded by over a hundred converted coaches of every style, shape and condition. There were MCIs, Eagles, Prevosts, GMs, and even a Neoplan, just to name a few, represented there.

Some were older than me, and others looked like they just rolled out of a showroom. But for anyone who dreams about a bus project, or is working on a bus project, or has ever converted a bus, the Arcadia rally would make you feel like a kid in a candy store. The beauty of this rally is that no matter the condition or age of your conversion – you’re made to feel welcome. Some of these vintage buses seem like they are held together with duct tape and wire, and they might park next to a Prevost thatlooks like a million bucks. But, both are viewed with excitement and appreciation.
The food was great, but the people are what makes the rally excellent. We’ve met so many knowledgeable, experienced, and helpful people. For example, we lost our defroster blower someplace in northern Michigan. Some folks came over and helped us diagnose our problem and knew exactly what needed to be done. Without that advice, we would have spent far too much money for a mechanic to spend hours trying to find a very simple problem.

But even more important, we met some new friends. Some we have been chasing around the continent and never seemed to make a connection; finally, at the rally we were able to meet and spend time like old friends. Others are folks we never knew before, but now are etched into our hearts and we will follow for years to come. It’s so good to spend a few days, sharing meals, songs, prayers, and laughter. Some bus-nuts even pulled musical instruments from storage and started an impromptu jam session for some real down-home pickin’.
The catered meals at the Arcadia rally are much more that you might expect. The food didn’t just leave us overstuffed, it was delicious. We had chicken one night and there was so much chicken and potatoes that I couldn’t hardly eat it all… yet I couldn’t stop either. Another night, one of the bus clubs sponsored an all-you-can-eat pizza buffet. Now let me tell you, some of those boys can eat! Yet, there was pizza left over. Coffee, bagels, donuts every morning. . . the list just goes on and on.

In addition, there were door prizes every night, Ice cream socials, a self-defense class for the ladies, seminars about anything and everything bus related, and just plain good ol’ fashioned fun all week. Then, to top it off, Prevost sponsored some top-notch entertainment so there was music and dancing every night. The New Year was ushered in with style, music, and laughter (and a few swaggered toasts).
To go or not to go? We answered the question with a resounding YES, and we’re glad we did. The miles, the fuel, the time spent getting there were all worth every moment.
Next year? Well, that’s a story for another time. . .