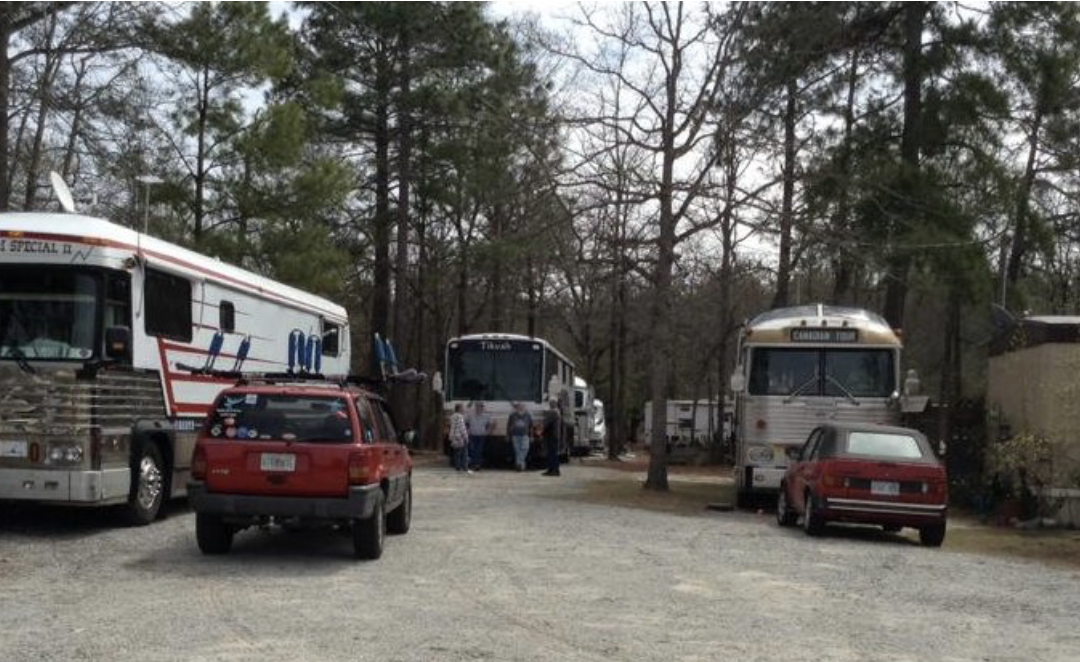 The journey continues. We left the heat, bugs, and desolation of Florida and moved about 430 miles north to a quiet little place in northern Georgia. This is like heaven on earth compared to Florida. The temperatures are mild, the bugs aren’t biting (yet), and the trees are blossoming. At this point I would say that northern Georgia is about the nicest place we’ve seen. Now I realize, that in a month or two the heat will be unbearable for this Englishman, but for now, it’s heavenly, and we will be gone by then.
The interior of the bus will be considered “Finished” on Saturday. That’s the day we get the carpet installed. Yes, I said ‘get it installed’. That’s a story of its own.

We have been searching for just the right carpet. The price of something good is expensive, and finding a royal blue carpet is almost impossible. We drove all over our area in Florida with no results. We decided that since the major carpet mills are in Georgia we would check here before returning to Michigan. Since we have some time here in Dearing Georgia we decided to take a ride to town and look at a couple carpet stores. There was one place in town that had a lot of remnants. They even had a real pale smoke blue. Neither of us were in love with the color, but the quality was excellent and the price was cheap. We asked the salesman if there were any other places in town that we should check. He told us of a couple others, including one about ten miles out of town. We made our rounds, including making the drive to the competitor to weigh our options. Nothing! So, the next day we returned to the carpet place to pick up the pale smoke blue. We decided something was better than nothing and the price was right. Well, we got there and began to second guess. Do we want it or not? We wasted too much of the salesman’s time and really couldn’t decide. Finally he had an idea. They have a sister store up the road a ways in the next town. He called and the other salesman said he had exactly what we needed. . . size, color, quality – exactly. We drove to the next town to see it and bought it on the spot. It was perfect. Now, I ask, why didn’t the other salesman, yesterday, mention the sister store? Strange.

We made the deal, for a very good price, then I walked the salesman to the door and said “see that little Chevy Tracker, that’s how I have to get this home”. He smiled and said “Where do you live?”. We explained that we were staying in Dearing (about 15 or 20 miles from this store). He laughed and said “I live there, why don’t I deliver it to you – no charge”. We shook hands before he could change his mind. It was a match made in heaven.
He delivered later that afternoon and I began to wonder how I would manage to cut this carpet for the tight spaces, especially in the bedroom. I can do it, I’ve done everything else, but just for fun I asked him if he installs. “YES” he replied with enthusiasm, “I’d be happy to install”. So I showed him my bus and the project and he gave me a price. Amy and I both had the same feeling – ‘this guy really needs the job’. So, I shook his hand again and made the deal. Then after, I began to wonder if I did the right thing. I don’t have the money to be spending on a job I can do myself. This isn’t that hard. I can find a space to work and do the cutting. Why did I just make a deal to have him help me?
The other bus friends here all convinced me that I can do it. But, Amy and I both felt strongly that we should let him do the job. I waffled a few times, but decided, for whatever reason, I’ll let him do the install. This will be the first job we’ve hired on the interior of the bus and it’s certainly one that I could have done. But, maybe the Lord just wanted it this way – maybe we’ll never know. Maybe we’re just crazy. Either way you look at it, when it’s all done, it will still cost less than the poorer quality carpets we looked at – without install.
So, Saturday we will have the carpet installed and the bus will be finished. When I say “Finished” I say it with a bit of a chuckle. Everyone will say that a bus is never finished. And it’s true. But, the project that we set out to do over the winter will be officially completed to the extent that we intended and envisioned. That in itself is miraculous!
I found myself humbled and thanking the Lord.
We set out on this Journey last fall, to go south so we could finish the bus. It was too cold in Michigan and we had an offer in Florida. We are so grateful for the place to work, make noise and sawdust, and complete the project.
We finished the bus in the amount of time we had.
We had just enough time
We had just enough workable weather
We had just enough resources
We had just enough money
We had just enough energy
We had just enough knowledge
We had just enough experience
We had just enough help
We had just enough talent
We had just enough…

Now, we are slowly moving with the changing spring weather. Currently in northern Georgia. We find our finances have dwindled to dangerous lows. Yet, we find the desire to pay a carpet layer to do a job I could do. We many times found our energy level to be depleted, but managed to keep moving “just one more day at a time”. We have humbly bowed our heads to the one who knows our needs and our hearts and provides just enough. I’m convicted by the memory of the story of Jonah. If you don’t know the story – ask me. I think there’s a sermon in there someplace.