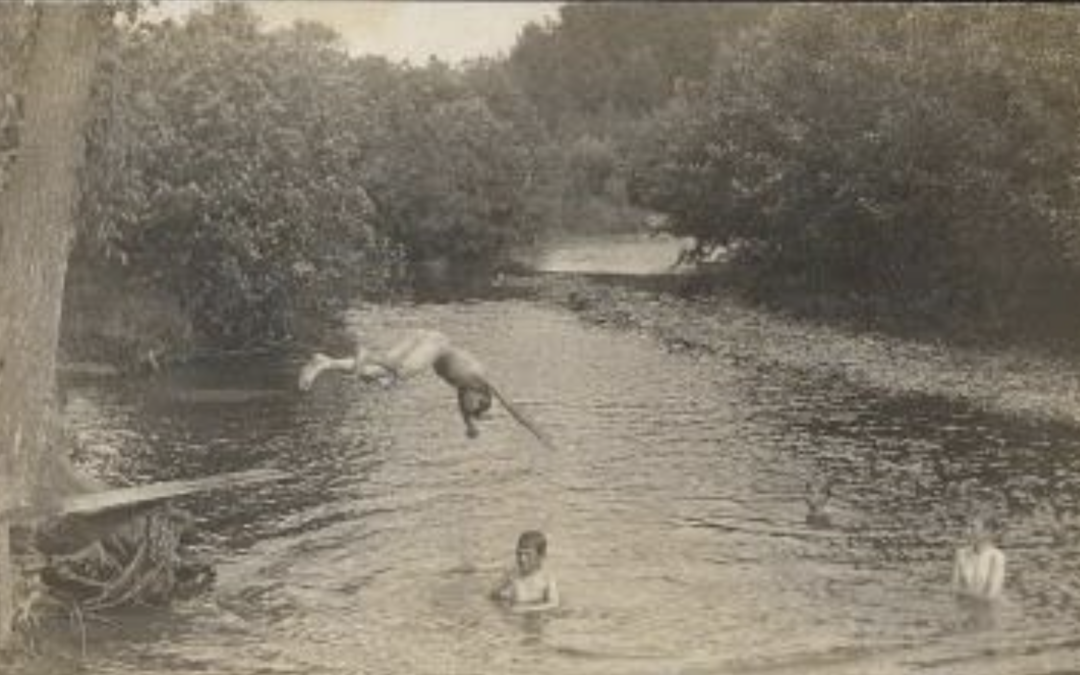 As a boy we had land that was backed up against state land. In my mind, that always made the property feel almost endless. It was not uncommon for me to meet friends back in the woods. In those days we would hunt turtles and frogs, or even go skinny-dipping (yes, I know that’s a shock to the family). Hey, we were kids and we had hundreds of acres to play – and play we did! For me, anytime I could get away from the house was a plus. My dad always expected me to be working, especially in the summer. Turning up the garden, mowing the grass, taking care of animals, fixing cars… the list seemed endless. I’m sure I did the least I could do as fast as I could then would attempt to vanish before another list appeared. So, my incentive to spend time in the woods was great.

There were many sites to see, things to explore, and fun to have. I remember a large hill we called “Pinnacle Hill” that had, at one time in history, a fire tower on top. From the top of this odd steep hill you could see for miles in most any direction. The top of the hill had an old foundation from the tower and we would explore the remains, and make believe we lived in a time long ago. Also, at the bottom of the hill were a few cars, I assume they were cars that attempted to climb the hill without success and found themselves wrecked at the bottom. Wrecked cars are always a treasure to a boy.

Scattered throughout the woods, along the trails were various foundations from long ago abandoned homes, barns, or shelters. I’ve never known the history of these locations, but our imaginations would run wild of cowboys, horses and Indians. We had many fights with the Indians in those woods -or maybe we fought the cowboys… either way, the fun and imagination never ended.

I don’t remember today how much of my wanderings in the woods my parents were aware of. I would never be brave enough to go without the permission of one of them (probably whoever had the shortest work list), but did they think I was playing at the neighbors or did they know I was way back a mile or two in the woods? I don’t know. I know my parents were very protective, but the state land was always considered a safe place, as if an extension of our own land. One thing I know for sure, in those days I could run like a deer and could be back home in only a few minutes it seemed. I knew those woods and could easily run even in the dark.

One afternoon, in early May of 1975 my friend Mark Mellendorf and I had made plans to meet back in the woods after school and camp out. (I’m sure we would not have actually camped out at eleven years old, but that was our play idea). He was going to bring his cousin Scott from out of town. In my memory it seems that there would have been more of us, maybe four or five. It was fun to find a secluded place in the woods, build a fire, set up a tent and be cowboys for a night. I don’t think we had done that yet, both because it was early in the season and because we were still rather young to be out alone. But somehow we managed to get permission. As I remember it, we had made plans for a number of days prior. Friday after school came, and I rode the bus home. I began to make preparations to go camping with my friends when my dad intervened. I don’t remember the details of our conversation, but I do remember that he decided that I had to be involved in some kind of church activity that night instead of going with Mark and his cousin. I had no interest in going to this church thing and hanging out with a bunch of old people when my friend was in the woods having fun. Secondly, in those days we didn’t have cell phones and making phone calls was not usually allowed except in emergencies. I knew my friends would be out there looking for me, and I would let them down by not showing up as planned. I can still feel the anger boil inside of me about my dad’s decision. But when dad make a decision I was not to question him. It’s likely that I never spoke a word, but the anger inside of me can be felt still to this day.

Mark and Scott went to the woods as planned. I can’t tell you why there were at Toby Lake (some maps say Tody Lake, all the names were just made-up by the locals). Toby Lake is not where we would have met. They would have had to pass Toby Lake on the way to our meeting place near the Pinnacle Hill, so either they were playing along the way or they were taken there. I’ll never know. Its also possible that the newspapers did not identify the lake properly. These lakes are really nothing more than ponds scattered throughout the woods, you could easily walk all the way around most of them in a few minutes. The lake we intended to camp at had a swimming hole on one end and a tree with a rope to swing out into it. I’m sure they were nothing more than a mud holes, but to a boy – it was heaven.

That Friday was the last time I ever saw Mark. He and Scott were brutally murdered that night. The details of the murder are still fuzzy, and at the time I didn’t know anything except that they had been killed in an awful way. The stories at school ran wild. But, the truth was even more bizarre than fiction. Mark and Scott were found by a teenage drop-out. Not the kind of kid we would have invited to our play time. My guess is that the 17 year old killer, Kenneth Earl Nard, approached Mark and Scott and wanted to be involved in whatever they were doing. It would have been obvious that they were alone and headed into the woods to camp out. Kenneth was most certainly turned away and was offended that, once again, nobody wanted him. (One newspaper quoted a cop saying “Kenneth was a born looser”).

The boys were beaten, sexually assaulted, strangled and murdered that night. Mark was later found hung in a tree by his own sweater, while Scott was found nearly naked laying in a shallow creek.

I should have been there that night. It haunts me still -the questions. If I would have been there would I have been murdered too? Or, would have three boys been enough to cause the killer to move on without incident? Most likely, there would have been three dead, strangled bodies that night. Strange to think that my deep-set emotion from that weekend is not relief that I wasn’t involved in the murder, but boiling anger that I wasn’t allowed. For whatever reason, God spared my life that cool spring evening through my dad, yet instead of gratitude I feel frustration and anger. I’m not sure, even today, how I feel about it all. In some ways my emotions were seared that weekend, I felt a kind of hatred for my dad for many years. As an adult I realize that he made a decision based on what he felt was best for me that night. He wanted me involved in activities at church and most likely was trying to minimize my time with friends that could have taken me into other kinds of trouble. Certainly nobody could have predicted the results of that night. But God knew and used my dad to spare my life.

Of course that begs the question, why didn’t God spare the lives of Mark and Scott? Why did he allow such brutality? I’ll never know the answers to those kinds of questions. God is sovereign. I can’t imagine the pain the parents of Mark and Scott endured. I don’t even know how much they know of this story, or even, how much of this story they know that I’m missing. My heart still aches in some ways because of that night, there will always be a lot of “why” questions that remain unanswered.

It took a lot of time, probably months, before I would walk into those woods alone again. There was rumor in the school of a serial killer that roamed those woods. The truth is, there was, in fact, a murderer who was responsible for up to five more murders, much like the massacre of my friends. I don’t know if they were copy-cat murders, or just coincidence. However, it seems the killings were unrelated. The killings of 1975 shook the community and affected every boy in my school.

After a time, I began to wander in the woods again. I visited the site where my friends were so brutally killed. I tried to imagine myself being with them. I tried to imagine being killed. There was no counseling in those days. Actually, we just didn’t talk about it. I never spoke about that night with either of my parents. Everything I knew was from rumors at school and from the newspaper articles I have searched out recently. But life moved on. I learned to play in those woods again. I had other friends and we played cowboy and Indian in the woods and hunted frogs in the ponds. The memory of Mark and Scott has faded. The facts are obscured by time, but the feelings, deep down, are real to this day. And when I walk in the woods today, I often look to the little ponds and old foundations and wonder – what if I was there that night?

I hope one day to meet them again along a small stream in heaven. Maybe I can be an eleven year old boy again and we can go camping together. We can play cowboy and Indians and go skinny dipping in the pond. I wonder if that’s allowed in heaven?