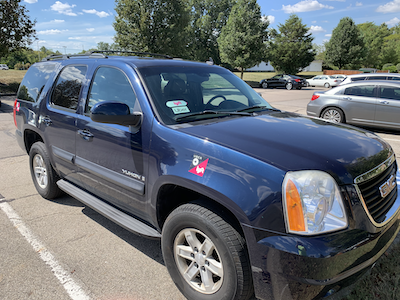 As many of you know I do RideShare driving occasionally. Driving for Uber and Lyft gets me out of the house allowing me to meet some interesting people and provides a small stream of income that makes no specific demands on my schedule.

Lyft has an option on their app that allows riders to schedule a trip ahead of time in contrast to the consistent rides that randomly bounce the driver all over the city. The scheduling feature allows drivers to view the available rides and decide if we want to accept the fare.

On Saturday I was planning to go drive in Cincinnati during the afternoon. I was casually checking for scheduled RideShare opportunities. Late Saturday morning a ride appeared on my app that was a rather profitable ride from Lebanon (my home town) to Cincinnati within an hour or so.

That was perfect. It would get me into the city to drive and pay me very well to get there. I clicked on the ride and scheduled it.

When I arrived at the home, a man and his teenage son came out and affectionately said goodbye to one another. The boy got into the back seat of my Yukon and I started the fare and began the trip to the far side of Cincinnati, about a forty minute drive.

I tried to engage the boy in conversation but was defeated in my competition against his cell phone. That’s not unusual with teens, they live in a world that doesn’t know how to communicate with real life people. Normally I just turn up some music and leave the rider alone. But for some reason decided to push a little more.

I learned that his name is George. Then I asked him if he likes to read. He replied that he doesn’t, but prefers to watch YouTube or movies. Again, although concerning, it’s typical. I explained to him that I’m an author and I write books. He perked up a little and asked what I write about. I felt like I finally had found something to talk about.

I explained about the historical fiction Simon Series books I write, and then I told him about Pagiel and the book I wrote about a fourteen-year-old boy who attempted to kill himself. Now I had George’s attention.

He asked why Pagiel shot himself. I tried to balance the truth but not say too much. I explained that Pagiel came from a broken home (knowing this was true of George too, because I was taking him from his dad’s house to his mom’s). As a young teen Pagiel got deeply involved into video games and spent all of his time on YouTube and watching movies. This drove him deeper into witchcraft, demonic things and other perversions. Now George was listening intently.

I handed George one of my cards and told him to look up the Pagiel website when he got home. (the card is for Tikvah.Life but is a landing page for Pagiel.Life and many other websites).

Again, It was very quiet in the car. After about fifteen minutes I heard soft sniffling from the back seat. I looked back to see that George was crying. He had earbuds in his ears so I couldn’t hear what he was listening to, but he had looked up the Pagiel.Life webpage and was reading and watching the videos. He started asking questions.

George said he would watch the other videos, as I said goodbye and dropped him off at his mom’s apartment.

After pulling away, I checked my messages and there was a voicemail from George’s mom that had come in much earlier. She was simply making sure George was on the way. I texted mom and apologized for not responding but that I don’t take calls while I drive.

I then told her that George was a very enjoyable passenger and he’s welcome to ride along anytime.

She wrote back and said, “Thank you! He’s already reading me a passage from your book :)”

My heart was warmed and I said a prayer for George and his family.

I thank God for opportunities like this. This isn’t the first, and I’m sure won’t be the last. But God sets the appointments, I’m just the RideShare driver.